How can we reduce high income inequality?


There are many ways to think about income inequality. One can, for instance, look at it within the boundaries of a particular country and ask how is income distributed today among Brazil’s 198 million citizens? It is also possible to look at the average income per capita of all the countries in the world (or a region of the world) and ask: how unequal are income differences across countries at a particular moment in time? We can think of this as international inequality. One can also abstract from national boundaries and concepts of citizenship, view the world as one human family, and ask: how is income distributed among its 7 billion people? Call this global income inequality. 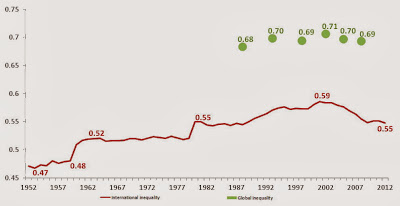 One of the more interesting—and surprising—results that fall out of the data on international income inequality is that although Gini coefficients have risen steadily since 1950 (see the chart above, for a group of 130 countries accounting for the lion’s share of the world’s population), when one looks at the high income (largely OECD) countries, Gini coefficients have actually come down rapidly and are, today, about half of their levels in the early 1950s. In other words, there has been a massive process of convergence among the rich countries. Indeed, there is empirical evidence that suggests that this convergence probably goes back to at least the 1870s, if not earlier.[1] This convergence is highly significant given that these are the countries that have been at the center of global capitalism and that have spearheaded the process of globalization. These are the countries that have made the most progress in opening up their economies to each other. Indeed, much of the postwar trade liberalization that took place in the context of the GATT was of an intra-OECD nature, of which the opening up which took place as a result of the expansion of the EU is perhaps the most salient example; freer trade and higher incomes is at the heart of these countries’ postwar evolution. It is also likely that at least in regard to the EU, income inequalities among its members have narrowed because these countries have put in place mechanisms to reduce intraregional income disparities through a generous system of cash transfers from the richer to the poorer countries; during the early years of EU membership Spain and Portugal received the equivalent of 5 percent of GDP in annual transfers.

Two other features of the data shown in the chart worth noting: (i) international inequality has improved over the past decade, reflecting the impact of high economic growth rates in China and, to lesser extent, India; and (ii) the very high level of global income inequality, for which we have a few discrete observations showing sky-high Gini coefficients, hovering around 0.70.

What is the problem, from a development perspective, with large income gaps? First, the larger the gap, the more difficult it is to make the jump. If catching up is perceived as “highly unlikely within my lifetime” then incentives emerge to make another sort of jump, leading to migration (legal or otherwise), brain drain and the permanent loss of native talent. Furthermore, being far behind creates a difficult context for the implementation of sound policies. The populations of poor countries can readily estimate—due to the power of communications technologies—how far back they are vis-à-vis the rest of the world, particularly the rich economies of the industrial world. This is likely to create unrealistic expectations of catchup and, in turn, force governments to favor a populist path, instead of the deliberate, gradual and at times difficult path chosen by the few successful cases of upward income mobility. “Lateness is the parent of bad government” is how Harvard’s David Landes puts it, where he uses the noun “late” to mean late entry into the development process, captured by a low per capita income.

At least part of our serious inequality problem would appear to reflect gross misallocation of resources. We have close to 800 million illiterates in the world, 530 million of them women; a large segment of the world’s population has thus limited access to the most essential tools to open the road to prosperity: knowledge and broad access to information. But we spend, according to the IMF, close to US$2 trillion annually subsidizing the driving habits of the global middle classes; a full 61 percent of the benefits of gasoline subsidies go to the fifth richest segment of the population, making these among the most regressive policies on the planet. Indeed, these subsidies are so sizeable that they also contribute tangibly to accelerate climate change.

Contrast this, for instance, with investing in girls’ education, a powerful engine of women’s advancement, with multiple beneficial development impacts. Reallocating the resources which now go to energy subsidies to teaching 800 million illiterates to read and write would free up some $2,400 per person per year—an embarrassment of riches.

Sadly, it would appear that in many countries high illiteracy rates are not necessarily a consequence of poverty or resource constraints. No. They are a policy choice governments have made, with perturbing implications for income distribution and opportunity.

There is much hand-wringing in the world today about high income inequality and the associated societal dysfunctions. There is broad international consensus that we should do something about it. The IMF numbers quoted above suggest at least one clear path open to begin to deal with this problem in an effective way. As is often the case, there is no shortage of sensible solutions, given the political will to do the right thing.
[1] Japan’s income per capita in 1870 was $622 while that of the United Kingdom was $2,740, both in 1985 PPP dollars. Within a hundred years this gap had disappeared. Over the period 1870-1960, the 6 poorest of the 17 industrialized countries in 1870 had the fastest growth rates while the 5 richest had the lowest growth rates.