Convergence in the Ease of Doing Business 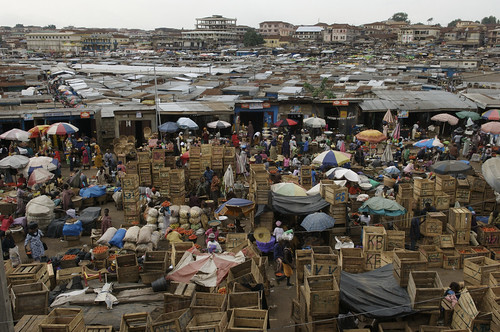 Suppose that one were to divide the countries included in the latest Doing Business report into two groups. Call the first group (made up of some 44 countries) the “worst quartile”—that is, the countries with the costliest and most complex procedures and the weakest institutions. Call the other group the “best three quartiles.” Then let’s ask ourselves: how many days did it take to establish a business in both groups in 2005? The answer is 113 days in the worst quartile and 29 days in the best three quartile countries, meaning that in 2005 there was a gap of 84 days between the two sets. Now, let’s repeat the exercise for 2013. The worst quartile is down to 49 days and the best three quartiles is down to 16; the gap between the two has narrowed to 33 days, which is still sizable but a lot less than 84. Repeat the same exercise for time to register property and time to export a container. For property registration, the gap in 2005 was 192 days and by 2013 it has narrowed to 63. For time to export, the gap in 2005 was 32 days and in 2013 it was down to 23. (The figures are presented in the charts below. Only a small subset of the indicators has been included here, for illustrative purposes). 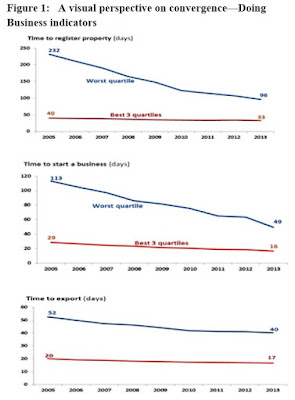 In other words, there is strong evidence that the countries with the most costly and complex procedures and the weakest institutions are adopting some of the more sensible practices seen in the better performing countries. There is a major process of convergence underway. Of course, a successful development agenda that facilitates convergence in income per capita and other measures of welfare (life expectancy, infant mortality, and so on) will involve many interlocking pieces. But, nevertheless, the sorts of rules that underpin the activities of the private sector—smart and light or cumbersome and heavy—are clearly an important part of this, as the private sector is the primary engine of job creation and economic growth.

In thinking about why convergence is taking place a couple of factors come to mind. There is greater understanding—in government, the business community, civil society—about the need to create a friendlier environment for private sector activity if economic growth is to take off and if countries are going to be able to benefit from greater foreign investment inflows. In an integrated global economy, local rules matter a great deal and the countries that strive for coherence, predictability and transparency in this area will make greater gains than those that don’t. The Doing Business indicators themselves may have been a key catalyst for change, focusing the attention of stakeholders on weaknesses in the regulatory environment and the presence of better practices in other countries.

There is another way to look at the convergence story. The graph below shows, for every region of the world, the evolution of the Doing Business “distance to the frontier” metric, a measure of the gap to best business practices in the world. As can be seen, the OECD is the best performing region of the world. This, in itself, is not surprising. What is notable about this chart is that ECA (Central and Eastern Europe mainly), in recent years, has overtaken other regions of the world and is now closing in on the OECD. This story has two angles. Many of these countries were engaged in significant economic and structural reforms in the period leading up to EU accession in 2004, intended to narrow the gap with respect to established EU members. After accession, countries like Poland, Latvia, Estonia, Lithuania, Slovenia and others have had to continue to reform to keep up with the likes of Sweden and Germany, tough partners and competitors. Furthermore, future members of the EU, such as Macedonia, Albania, Montenegro, and other countries in South East Europe are having to reform actively, for the same reasons as their predecessors 15-20 years ago. So, the EU has proved to be an extremely effective and powerful institutional mechanism for convergence. At a time when the EU brand has suffered because of the Euro crisis, it is important to remember that this impressive experiment of political and economic integration is having a lasting impact on all of its less privileged members, helping them to converge toward higher levels of efficiency and prosperity. 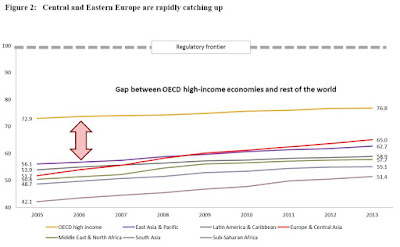 We have known for many years that in countries where governments make it difficult for businesses to be established—because of bureaucratic formalities or burdensome regulations—levels of informality will be higher and corruption will be more prevalent as well. Facilitating businesses to be legally registered has been shown to have positive employment effects in a number of countries, across the world. We also know that having property registration regimes that are sensible and transparent is important for the business community. An entrepreneur that has property rights that are ill-defined or subject to challenge, will have great difficulties accessing the financial system by using his/her property as collateral. So, a good system of property registration is far more than just another bureaucratic procedure to be complied with—it may often be a pathway out of poverty. For those businesses engaged in international trade, being able to export through the country’s main port in a way that is hassle free and not excessively burdensome in terms of cost, time and procedures, boosts the volumes of trade. Or, conversely, delay trade and the country will export less and this will negatively affect economic growth. The above convergence story highlights the important economic development implications associated with the recent evolution of the Doing Business indicators.