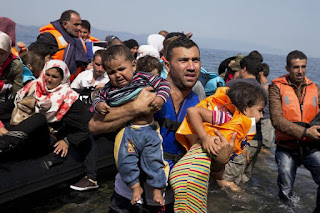 In his fine book The Upside of Down: Catastrophe, Creativity and the Renewal of Civilization, professor Thomas Homer-Dixon refers to the projected divergence in average income per capita between the rich and poor countries.

Even if one assumes that the low income countries grow for the foreseeable future at much higher rates than the high income countries, because the current gap in per capita income is so large, the gap widens for many decades to come before convergence finally sets in well into the next century, if not later.

In other words, by 2015 the rich countries are so far ahead of the rest of the world that, except for a handful of countries with incomes very close to the income of the poorest rich country, no one else has a realistic chance of converging, as Taiwan (China) and South Korea did during the post-World War II period. This phenomenon, of widening income gaps in the future notwithstanding the presence of higher growth rates in the poor countries today is what Homer-Dixon (p. 189) calls “the dirty little secret of development economics.”

There are several problems with such widening gaps. A first obvious one is that the larger the gap, the more difficult it is to make the jump. Taiwan (China), Singapore and Korea did it and Chile has been admitted to the OECD—but these cases of upward mobility are few and far between. Landes (1990) thinks that an important constraint is knowledge and know-how, which cannot be easily acquired.

The development of Taiwan’s human capital during its transition into the rich economy club was an extremely complex process. Although seemingly a disadvantage at the time, the brain drain of the 1960s and 1970s—when some 50,000 of the brightest young Taiwanese went overseas (principally to the United States) for university and advanced studies—allowed Taiwan to build a large pool of qualified and experienced people before its economy was ready to absorb them.

From 1985 onwards, incentives drew them back to Taiwan as entrepreneurs, to create start-ups in the science parks, or to take up research, academic, and management positions, bringing not only their knowledge and experience, but also their networks of contacts and working relationships with leading international companies, and enabling today’s Taiwanese universities to educate its own manpower for continuing expansion at home.

These informal networks, supplemented by overseas offices of various institutes and research centers, have facilitated technology transfer, innovation, and strong entrepreneurial relationships. In other economies, the story of training and higher education has often been, as noted by Landes, “the permanent loss of talent.”[1]

Being far behind creates a difficult context for the implementation of sound policies. The populations of poor countries can readily and accurately estimate—because of the power of communications technologies—how far back they are vis-à-vis the rest of the world, particularly the rich economies of the industrial world. This is likely to create unrealistic expectations of catchup and, in turn, force governments to favor a populist path, instead of the deliberate, gradual and at times difficult path chosen by the few successful cases of upward mobility.

When the gap is so wide that the possibility of catching up within a generation or two is no more than a pipe dream, governments may find it difficult to engage the public in the pursuit of cautious, coherent policies. “Lateness is the parent of bad government” [2] is how Landes puts it, where he uses the noun “late” to mean late entry into the development process, captured by a low per capita income.

Furthermore, the combination of widening income gaps between countries and the globalization of ideas, knowledge, access to information and awareness of others’ living standards provides powerful incentives for the movement of people across international boundaries.

If to this we add the likely future effects of climate change on vulnerable populations (developing economies are far more dependent on agriculture, which will be hard hit by climate change) and the sort of chaos and generalized upheavals we have seen in recent years in a growing number of countries (e.g., Syria, Iraq, Yemen, Afghanistan, Mali, Venezuela, to name a few), then those incentives are magnified and migration risks becoming an even bigger challenge.

Some economists (e.g., Paul Collier) have highlighted some of the difficulties associated with a segmentation of the world into two broad regions, one characterized by either high income or at least positive economic growth and another where some 60 countries with a combined population in excess of 1 billion are not only falling behind but often falling apart, becoming exporters of “violence and people instead of goods and services,” [3] thereby beginning to pose a security threat to the rest of the world.

Collier argues that economic development is very much about giving ordinary people the hope that, at some point in the not too distant future, their children will have access to the same opportunities available to children in Germany and Sweden and other rich countries. The notion of convergence is very much at the heart of much of what we do at the World Bank, the idea that we will gradually see in the developing world the unfoldment of the policies and institutions that have propelled the rich countries to levels of wealth and prosperity never before reached in the last several thousand years of recorded history. In the absence of that hope, smart, motivated people will seek to escape from their societies and try to look for those opportunities elsewhere.

This creates a huge challenge for the recipient countries if the numbers are large enough to put strains on rich country budgets and infrastructures and it can deprive the sending countries of essential human capital. Hence the central importance of the World Bank’s current focus on shared prosperity; it matters not only for development outcomes, but it also clearly has a security and political dimension that goes far beyond a narrowing of income differentials.