The Moral Dimensions of Corruption 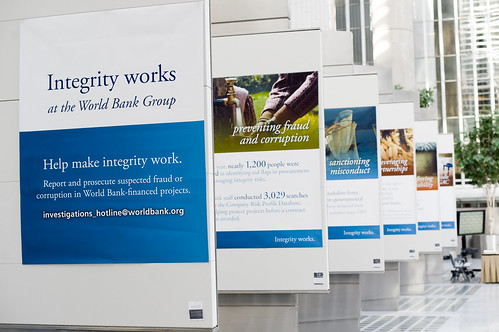 In our earlier blogs on corruption we have looked at the causes and consequences of corruption within the process of economic development. In our last blog, Six Strategies to Fight Corruption, we addressed the question of what can be done about it, and discussed the role of economic policies in developing the right sorts of incentives and institutions to reduce its incidence. This blog will provide some thoughts on the moral dimensions of corruption.

In his erudite and all-encompassing study of bribery through the ages, Noonan (1984, p. 700) observes that “the common good of any society consists not only in its material possessions but in its shared ideals. When these ideals are betrayed, as they are betrayed when bribery is practiced, the common good, intangible though it be, suffers injury.” Bribery and corruption—however much the experts may wish to disguise them in the language of costs and benefits and economic choices—have a moral dimension. We ignore it at our own risk and at considerable cost to society in terms of the effectiveness of measures taken to limit or ameliorate their corrosive effects. Noonan gives several reasons to support the thesis that bribery has a strong moral dimension. By now, it has been criminalized in virtually every country in the planet, although enforcement of the laws condemning it may be weak. As we have seen, corruption itself may have weakened the state and its capacity to punish violations of the law, but there is little ambiguity that bribery is regarded everywhere as a perversion, hence the need for secrecy, for deception, and the use of euphemisms (gifts, contributions) by the guilty when it explodes into the open.

Bribery interacts with power. He who is willing to pay the most will be granted the exemption, will shut out the competitor, will gain the advantage. A plutocracy, a world in which wealth and money rule, is not a system likely to capture the popular imagination. Bribers understand this, and for that very reason they do not advertise their actions and are condemned to act behind the scenes, on the margins of legality and morality. Of course, bribery and corruption are betrayals of trust. Noonan (p. 704) puts it elegantly when he says: “the social injury inflicted by breaches of trust goes beyond any material measurement. When government officials act to enrich themselves they act against the fabric on which they depend, for what else does government rest upon except the expectation that those chosen to act for the public welfare will serve that welfare?” Equally important, bribery and corruption are deeply at odds with the moral basis of most of the world’s great religions, which have often provided the moral underpinnings of the modern state, as is clear, for instance, by reading the U.S. Constitution and other such founding documents.

In many of the measures discussed in previous blogs aimed at combating corruption, the underlying philosophy is one of eliminating the opportunity for corruption by changing incentives, by closing off loopholes and eliminating misconceived rules that encourage corrupt behavior. If, for instance, the budget is formulated, approved and executed in an environment of clear rules and transparent procedures, it is far less likely to be a mechanism for abuse and personal enrichment. But an approach that focuses solely on changing the rules and the incentives, accompanied by appropriately harsh punishment for violation of the rules, is likely to be far more effective if it is also supported by efforts to buttress the moral and ethical foundation of human behavior. A strategy in the struggle against corruption that is based solely on the design of better rules and harsher punishment for offenders is likely to be expensive and inefficient: expensive because of the need to build an infrastructure of enforcement that is credible and which catches and deals with offenders, but inefficient because it immediately pits the regulators/enforcers against the offenders in a cat-and-mouse game. And we have seen that the mice are often well-equipped to win, because the stakes are so high and the cat (regulator) is underpaid, overstretched, and outsmarted. The 2008-2009 global financial crisis revealed huge gaps in the regulation of the “shadow” banking system (hedge funds, investment banks, other off-balance sheet vehicles), but also showed that poorly-paid regulators are no match for the creativity of bankers willing to stretch the rules in an effort to disguise reality and boost short-term profits.

This means that in the long-term perspective, anticorruption strategies have to be supported by moral education and the strengthening of the ethical principles underpinning society. Appropriate policies and the right sorts of incentives may, in the end, go some way in addressing the problem of corruption but may in many places not be enough. This may mean reinforcing the civic responsibility component of secular education. It may require religious leaders—who bear such heavy responsibility for the decline of religion as a force for social cohesion—to set aside narrow doctrinal differences and return to the spiritual roots of their respective faiths to revitalize their ability to lead individuals and societies to a stronger identification with the spiritual rather than the material dimension of human nature. In particular, it will involve partnerships with all the organizations and social forces that have a strong ethical foundation. In a society with stronger ethical standards, the struggle against corruption will gain a new source of strength that will complement the progress made in recent years in improving the legal framework designed to combat bribery and corruption.