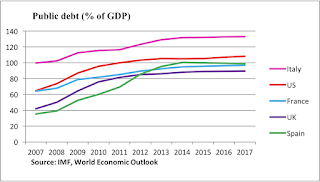 The 2008-2009 global financial crisis led to a number of large–scale government interventions across the world. These included massive provisions of liquidity, the takeover of weak financial institutions, the extension of deposit insurance schemes, purchases by the government of troubled assets, bank recapitalization and, of course, packages of fiscal stimulus, sometimes of a scale not seen since World War II. Even the IMF, the world’s traditional guardian of sound public finance, came out strongly in favor of fiscal loosening, arguing through its managing director that “if there has ever been a time in modern economic history when fiscal policy and a fiscal stimulus should be used, it's now” and that it should take place “everywhere where it's possible. Everywhere where you have some room concerning debt sustainability. Everywhere where inflation is low enough not to risk having some kind of return of inflation, this effort has to be made.”

One can argue whether the responses to the crisis were well-designed in particular countries, but there seems to be broad consensus that rapid international action on a number of fronts was necessary to prevent a 1930s-like depression with unforeseen global economic consequences. In the years that followed, public-debt levels rose rapidly, particularly among the advanced economies. Spain, for instance, saw its debt levels rise from under 37% of GDP in 2007 (well within the Maastricht criteria) to about 100% of GDP in 2014, according to IMF estimates.

Indeed, in many countries public indebtedness today stands at levels last seen at the end of World War II. These fiscal developments, however, have not prevented the emergence of an intense debate, particularly in Europe but also in the United States and other OECD countries, about the desirability of continued fiscal loosening, to mitigate the effects of weak economic growth and high levels of unemployment. These debates—largely academic at first—have intensified recently and have had political spillovers in some countries, with resigning ministers arguing against the constraints of “austerity,” as happened recently in France.

I would like to argue that this debate is largely a false one, in the sense that many countries, in fact, do not have the luxury of entering into a prolonged period of fiscal expansion, in the hopes of revitalizing anemic growth rates. Some form of fiscal consolidation, supported by other structural and institutional reforms, may be the only viable path in coming years. Here are three arguments in support of this claim.
It is misguided to think that if we could only relax budget rules and allow bigger deficits and correspondingly higher levels of debt, this will eliminate the need for the painful and long delayed reforms that highly indebted countries so desperately need. France, a member of the G7 and one of the world’s larger economies, has been running budget deficits without interruption for the past 40 consecutive years. In good times and bad times. Under conservative governments, and left-leaning ones. Along the way, public debt has more than quadrupled from under 21% of GDP in 1980 to close to 97% of GDP in 2014. To argue that, now, with weak economic growth, the solution is to be found in yet another episode of fiscal loosening is to profoundly misdiagnose the cause for the sluggish growth. Sustainable economic recovery—essential to successfully address the debt problem—will only come when governments implement reforms that will help remove supply-side barriers that have long undermined competitiveness and reduced potential growth. If anything, the global financial crisis has shown the high costs associated with delayed reforms.