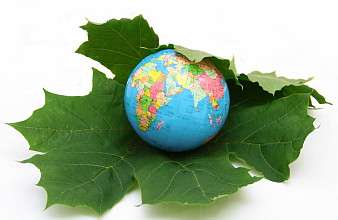 I’ve suggested recently that although high economic growth in recent decades has greatly improved average life expectancy, infant mortality, and other leading indicators policymakers and development practitioners were still worried about the sustainability of these trends and whether people in developing countries would eventually enjoy the high standards of living of high-income countries. This, against the background of a planet under increasing stress, particularly as a result of climate change. In this blog, I explore some of the actions needed to sustain our global economy.

Climate change risks. A key finding of the latest scientific work on climate change is that the annual cost of introducing control measures for greenhouse gases is far smaller than the potential cost of uncontrolled climate change. Duly aware of the margins of uncertainty associated with such calculations, the UN’s Intergovernmental Panel on Climate Change (IPCC) has, in the past, provided estimates suggesting that stabilizing greenhouse gases by 2030 would slow global economic growth by slightly more than 0.1 percentage points per year.

The risks of inaction, however, are huge. It has proved difficult for computer models to deliver robust cost estimates for scenarios that lie outside the range of recent human experience. A rise in temperatures of 3°C with respect to pre-industrial levels, for instance, has not been seen on the planet in the last 1 million years, though this is the envisaged increase consistent with the pledges made by 175 countries in Paris in 2016.

So, one central element of the solution will be implementing a transition to a low carbon economy that will involve the use of cleaner fuels, including solar-photovoltaic and onshore-wind technologies, which have become increasingly competitive and which will have a number of other collateral benefits, such as preventing 2 million premature deaths in India and China every year linked to air pollution.

We will also need to invest in energy infrastructure, to replace aging capacity, and meet growing global energy demand, but also to boost efficiency. More generally, it is estimated that over the next 20 years global investment in infrastructure will be in the region of $5-6 trillion per year, three quarters of which will be new infrastructure in the developing world. Since well over half of total greenhouse emissions stem from investment in and use of various infrastructures, there is an overwhelming need, going forward, for all new such investments to be clean and green, as called for by Stern (2016) and others.

Conservation. We will also have to invest in conservation and in redressing some of the damage done to the environment through decades of neglect.  According to the Earth Policy Institute something like US$100 billion should be spent annually to protect topsoil in croplands, to stabilize water tables, to restore fisheries, and protect biological diversity. This sum of money is small in relation to the size of the global economy and it is certainly very small in relation to the trillions made available by governments in some of the largest countries to deal with the short-term effects of the last global financial crisis.

Energy subsidies. Another key dimension of this debate concerns the need for better utilization of existing resources, to promote opportunity and shared prosperity, particularly in the developing world, rather than to create distortions and worsen income distribution. An eloquent example of this is provided by a recent IMF study (2015), which factors in the cost of negative externalities from energy consumption (e.g.,  global warming, pollution) according to which energy subsidies (for petroleum, electricity, natural gas and coal) amount to some $5.3 trillion per year.  This astronomical sum is equivalent to about 6.5 percent of global GDP or somewhere between 5-35% of total government revenues, depending on the region.

The benefits of gasoline subsidies are the most regressively distributed in the world, with over 60 percent of the total accruing to the richest 20 percent of households.  If such subsidies were removed, the authors of the IMF study estimate that it could lead to a 21 percent reduction in CO2 emissions.  It could also generate positive spillover effects by reducing global energy demand and thus have a tangible impact on mitigating the effects of climate change.  Indeed, it would be difficult to come up with a public policy that is more socially and environmentally destructive than subsidizing energy consumption.

Technology. Obviously, technology can also play a key role. More efficient use of energy has reduced the size of energy consumption in global GDP by more than 30 percent in the past 25 years. Much more can be done in this area, particularly by resort to new technologies of energy conservation and renewable energy, including—as noted earlier—greater use of solar power, wind, and alternative fuels.

Simultaneously, a number of studies are underway in leading research centers to identify a range of human interventions which could either remove CO2 from the atmosphere or reduce the amount of sunlight that comes to the earth, under the general heading of “geo-engineering.” Some scientists think that, over the longer term, they could play a necessary, complementary role to other measures aimed at precipitating the necessary changes in human behavior which have been too slow in coming. For now, however, the consensus seems to be that putting too much emphasis on “technological fixes” could result in complacency, since politicians will always be receptive to solutions which do not, in the end, involve sacrifices on the part of voters, such as, for instance, higher carbon taxes or—God forbid—changes in patterns of consumption or lifestyles.

While this technological potential undoubtedly exists in the long term, its development will require global institutional arrangements, efficiencies of governance, financial resources and a culture of change in political and social systems, all of which are lacking at the present time. The immediate issue for sustainability is less one of ultimate limits and technological possibilities, but rather our present slow pace of change when faced with growing social and environmental challenges.

We have technological solutions for most our environmental problems, but are not applying them at anywhere near the speed necessary to avoid future crises. In the next (and last) blog on the sustainability of our development path I will address two important issues: the role of international cooperation and why human values and ethics are central to this debate.